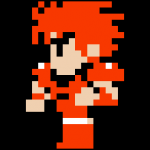 By Sedgwick, February 26 in PZ Suggestions