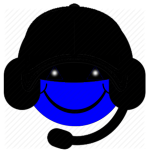 By JustinDaniels, November 23, 2019 in Bug Reports