Everyone loves lists, yeah? That fad didn’t get old, like, five years ago did it? No-one can accuse me of not having a cutting-edge blog.

Anyway, I’ve done enough blog posts where I whinge or rant so I figured it was time for some loveliness. Here are, therefore, the five indie games which make me go “wooo!” and “blimey!” and “I wish I’d thought of that!”

Now I’ve got to be honest, I know next-to-nothing about this game. Maybe it won’t work at all, maybe it’ll be awesome. Who knows? So then why have I picked it in my top five? It’s not because of what it is because, as I’ve said, I don’t actually know that. It’s because of the concept behind it. To quote from the developer’s webpage:

Our goals are to keep ourselves in business and to increase general knowledge of molecular behavior. Proteins, lipids, drugs, allergens, vaccines, degradable plastic, ocean acidification, heath: molecules are the key to understanding many important concepts. We will accomplish our goals by creating games that take place in the molecular world and making them available to as wide an audience as possible.

Well, I’m sold. At this point, I don’t really care what the game is, I just want something – anything – to exist from a set of people with this as their raison d’être.

Edit: Further information about this has now been added to their game page 🙂

This is a hard one to easily describe and I’ve probably horrendously under-sold it with my woeful attempt at a “genre” above, so I suggest you check out the in-depth information on their Kickstarter page. Essentially, imagine the cool modular creative aspects of Spore except with vehicles, plonk them onto a swanky planet, and battle other modular vehicles while attempting to harvest resources and– oh, for heaven’s sake, just click that link I provided and see for yourself.

There’s only 6 days remaining which is cutting things awfully fine – but it’s a great example of how to produce a Kickstarter pitch and, as with all great pitches, there’s a demo you can try out right now and then consider pledging!

Okay, so the Kickstarter period for this is over. And it was successful, so it’s ultimately not too important that I didn’t write this blog post a month ago. Because I’m sure the project would have really benefited from the three hits this blog may have generated. Anyway, the game. 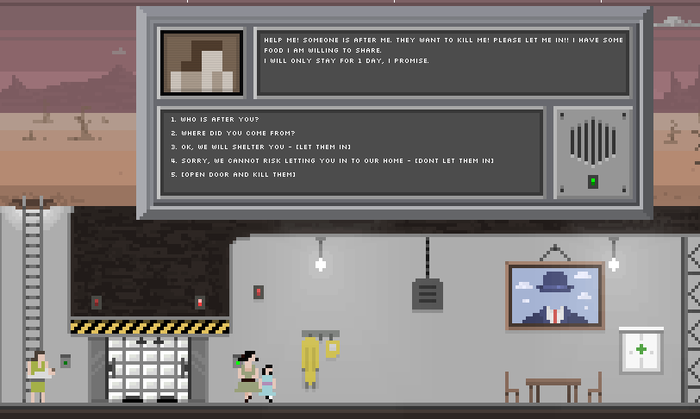 It sort of reminds me of Papers, Please! not because of the gameplay style but because of the element of protecting your family. Larger issues in play other than that of simply being a lone survivor in the apocalypse. It’s the kind of moral choices this would present and the narrative you construct while playing which makes this game sound so enticing.

So if you missed the opportunity to be involved in the Kickstarter campaign, do keep this on your radar.

#2 Crypt of the Necrodancer

Out of all of the games I’ve listed here, this is the one I wish I’d made. At heart, it’s your typical roguelike with its sprawling dungeons, array of monsters, powerups, equipment, all that jazz. But it’s been fundamentally fused with a rhythm game in a way that’s too far beyond charmingly brilliant to describe in words, so I’ll just show the trailer.

How has no-one had this idea before? Have they? They must have! No?

Pop it on your wishlist, from the Steam Store page.

Wow, there’s a surprise right? I totally haven’t pimped this at every possible opportunity. Now let me get something out of the way and, if you’re reading this SockThuggery, I mean this in the nicest possible way: The graphics aren’t, like, particularly amazing. I’m sorry, I really am and, let’s face it, that’s a criticism you can level at Project Zomboid too.

The important thing is, though, that they do the job – they don’t get in the way of the action and, in my opinion, suit the style of game rather nicely. I’ve seen better pixel art in my time BUT (and it is a big ‘but’) the game’s got class – it does a terrific job with what it’s got. I mean, look at this:

That’s the gameplay in a nutshell. It’s cool, it’s clever, it’s unique. It’s the most interesting gameplay concept I’ve seen since Fract OSC. All it needs to do now, is reach its Kickstarter goal. Click here to check it out, try the demo, and consider pledging!

This site uses Akismet to reduce spam. Learn how your comment data is processed.